A History of Gay Literature: The Male Tradition

'A work of stunning scholarship and intelligence, a core requirement for every library in the field' - Gert Hekma, Sexualities

This book examines a broad range of literary texts, from many different cultures and periods, that might be amenable to ‘gay readings’. In a flood of positive reviews, it was variously described as a 'monument', a 'landmark', a 'masterpiece', 'magisterial', 'herculean' and even 'superhuman'.

The chapter headings are: 1: The Making of the Gay Tradition. 2: The Greek Classics. 3: The Roman Classics. 4: The Christian Middle Ages. 5: The Orient. 6: The European Renaissance. 7: Christopher Marlowe. 8: William Shakespeare. 9: The Pastoral Elegists. 10: From Libertinism to the Gothic. 11: New Bearings in the Novel. 12: The American Renaissance. 13: Muscular Aestheticism. 14: Spirit versus Physique. 15: Marcel Proust. 16: Homosexual Men by Women. 17: The Harlem Renaissance. 18: The Tragic Sense of Life. 19: Fantastic Realism. 20: Towards the Popular. 21: The Pink Triangle. 22: The Post-War Starting-Point. 23: European Poetry on the Left. 24: Post-War Tragic Fiction. 25: The Homosexual in Society. 26: Black African Poetry. 27: From Solitary Vice to Circle Jerk. 28: Boys and Boyhood. 29: The Age of Antibiotics. 30: The Family and Its Alternatives. 31: The AIDS Epidemic. 32: Poetry and Paradox. 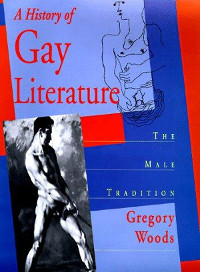 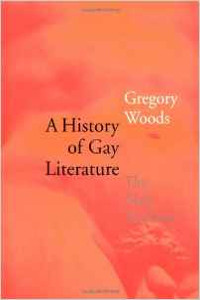 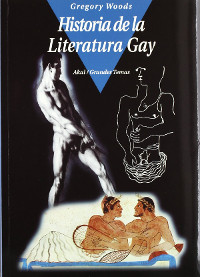 It is the extraordinary achievement of this book to go into its subject in simultaneous breadth and depth, and to virtually create the tradition it so boldly assumes, in the act of tracing it ... A History of Gay Literature is a landmark work ... often exhilaratingly eloquent.

In this intriguing history he has traced almost all the manifestations of homosexual desire ... Woods has created an alternative tradition.

He does send off sparks which illuminate areas his coyer straight brethren have wanted to keep in the closet.

Ambitious ... immensely readable and informative ... greatly enlivened by the author’s occasional combativeness and his sharp sense of humour ... absorbing and provocative.

A History of Gay Literature will swiftly come to be regarded in the academic world as an exemplary piece of work.

Woods has attempted nothing less than an overview of the literature of the entire world as it relates to male homosexuality. The range of his erudition is daunting ... From the nineteenth century onwards Woods has a colossal corpus of literature to deal with, and there is little that he misses ... Later he becomes one of the first critics to look seriously at contemporary gay fiction.

Woods bucks the Anglo-American tradition by insisting on the internationalism of homosexual culture ... Big and brassy, it could be Shirley Bassey. Only with footnotes.

Attempts an unprecedented scope and is full of shrewd appreciations and neat bits of information. Of course, there are aspects to quarrel with, but that’s part of the interest. It’s that unusual kind of critical study that makes you want to read the books.

It is compendious, highly intelligent, and elegantly written, not a combination of virtues you expect to find in an academic study nowadays.

I have read every word of this book and like it a lot—the way he organizes it around topics, chapter by chapter, the intelligence of his interpretations, the really good writing, constantly (so unusual for a reference book—but then it’s better than a reference book), and I find little to disagree over with his judgments … He has performed a superhuman task.

Highly intelligent, jauntily written, and endlessly informative, A History of Gay Literature is an impressive addition to contemporary gay scholarship.

These finely honed gay readings of selected Western (and some Eastern) literary texts reward the careful attention they demand ... Woods’s own artistry is evident throughout this elegant and startling book ... Though grounded in the particulars of gay male identity, this masterpiece of literary (and social) criticism calls across the divides of sex and sexual orientation.

Dense but rewarding ... Throughout, his point that homoerotic traditions are a literary constant is well-taken and persuasively argued.

It’s hard, after a while, to imagine that Woods has missed a single literary depiction of homosexuality, implied or otherwise ... The result of his extreme diligence is a volume that serves many purposes ... Woods is a prodigious scholar who appears to have read more than Samuel Johnson and Harold Bloom combined ... He is a smooth stylist who eschews the fustiness of academic writing for epigrams and crisply rendered judgments ... Woods is adept not just at finding the homophobia that creeps into the work of many literary critics but at providing counter-readings of his own, and those readings are often persuasive and closely reasoned ... We know we are encountering a fine and subtle critical mind.

Woods has produced a study that stands as a monument to the progress of gay literary criticism. No one to date has attempted such a grand world-wide history. That Woods is successful in also writing a highly readable book is not to be overlooked. Even those who have read extensively in the field will learn more than a little here ... This work can be considered comparable to the Cambridge or Columbia histories of literature — but only if one puts aside their more turgid qualities. For those who have never had the patience to sit down to the St. James or Greenwood Press dictionaries on gay men's literature, this book will be like cool water. It cannot be recommended highly enough.

Imagine rewriting all the prefatory essays in the Norton Anthology of English Literature from a gay reader’s perspective, and you’ll have some idea of what Gregory Woods is about in his bold, intelligent and gorgeously encyclopedic study.

It is a survey course but an excellent one … it puts everything in a social and aesthetic context, and its observations are measured and well-reasoned.

The first full-scale account of male gay literature across cultures, languages, and centuries, this work is also the definitive history of a tradition … This encyclopedic overview is also a readable compendium and as such is suited for both reference and circulating collections.

Breath-takingly well-informed … Woods is instructive on such a wide range of materials … I cannot say that there is a chapter in which Woods fails to organize his material interestingly, introduce new writers, or cast a new light on familiar writers and works … Woods defies expectation by saying interesting things about so many different writers, that it becomes a challenge to think of something he will not be informed and opinionated about … He writes most beautifully about the material of his specialty, poetry of the twentieth century. There are surprises throughout this volume.

Woods has produced something much more monumental than an exhaustively annotated bibliography of gay figures and text. He has effectively identified a new canon, or rather given a penetrative re-reading of the established canon from a gay perspective, and in a series of magisterial essays has created a sense of a usable literary past for gay readers … This is a landmark history of the gay male literary tradition, a riveting yet judiciously weighted and persuasively argued study that in spite of its obvious scholarship is easily accessible and hugely engaging. The field of gay studies has been notably advanced with the publication of this important, if understandably controversial, book.

It is extraordinary for its unusual breadth and for its mapping of a coherent tradition even as it is sensitive to the cultural specificity of sexual attitudes and literary expression … Woods’s retelling of this grand narrative is indeed impressive in its sweep and dazzling in the number of works mentioned. Quite simply, Woods has read and distilled a vast amount of material, both primary and secondary, both arcane and popular. Even areas that have been well worked over, such as Classical and early modern European literatures, here come alive with a vitality that is born of the critic’s fresh engagement with familiar but newly invigorated texts … Often witty and provocative, this fascinating and instructive book wears its deep learning lightly and deserves to be read by a wide and appreciative audience.

The hallmark of Woods’s intelligence is his counterbalancing of affirmation with more comprehensively thoughtful considerations.

This substantial, provocative and highly readable work celebrates the richness and complexity of the literatures that gay men write, read and offer to the broadcast market, from ancient times to the present.

A fat and overwhelming overview of the gay tradition worldwide. It is a work of stunning scholarship and intelligence, a core requirement for every library in the field.

His discussions of texts from the Renaissance onwards, and particularly from the late nineteenth century to the present, are almost always illuminating … The book is much more than an exercise in spotting the homosexual in literature; Woods expands a reading, rather than limits it.

This account of male gay literature manages to cross cultures, languages, and temporal periods to give a fuller sense than ever before available of the range and scope of the ‘gay tradition’ in literature … The book is rich in detail both of the texts themselves and of past and recent scholarship on them … This excellent volume of critical analysis and historical contextualizing is designed to identify, re-evaluate, and then institutionalize a usable past—that is, usable for the future, for interventionist rather than purely conservationist purposes.

Extraordinarily comprehensive ... Woods does display a secure, coherent and nuanced grasp of his material, and never falls into the trap of presenting an unsophisticated and ‘essentialised’ tradition ... Woods’s survey of the field is magisterial ... As a survey of the field of ‘gay literature’ and as a work of reference, this book is surely without peer. The bibliography alone is a marvellous resource, a superb and up-to-date collection of published work. The scope and depth of Woods’s knowledge are exceptional, and the quality of his writing and analytical control are similarly remarkable ... In short, this is a magnificent work of cultural history.