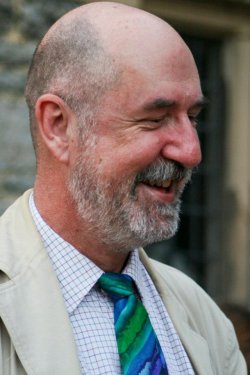 Welcome to my website. I use it to post information about my poetry and literary criticism, and also about my career as an academic and teacher. When I retired in 2013 I was appointed Professor Emeritus in Gay and Lesbian Studies by Nottingham Trent University.

"The poet with the sharpest technique for social verse in Britain today. He lets off fireworks through the official groves of English literature" - Peter Porter

"The poems of Gregory Woods have never failed to impress me ... For a start there are few poets around who can rival him technically" - Matt Simpson

"When I think of the dross that is regularly published, noticed, praised, rewarded, and then consider that for the most part Woods goes without recognition, I'm not so much aghast as enraged at the (still largely London) cabal that decides poetic worth in England" - John Lucas

"I'm not sure I had ever written a fan letter before to a poet I had not met, but that's what I did when I read two poems by Gregory Woods ... I admired them especially for their technical virtuosity, in that it was technique completely used, never for the sake of cleverness but as a component of feeling ... What an enviable talent Gregory Woods has" - Thom Gunn

"Probably, the finest gay poet in the United Kingdom ... a poet of considerable technical ability and intellectual depth" - Sinéad Morrissey

If you want to buy any of my books, please go to the Poetry and Non-fiction pages. Details of my publishers can be found on the Links page.

You left the city. I
decided to stay on.
The faces were familiar,
the buildings even more so.
It was as if all sounds
and smells were smells and sounds
of you: the trams, the sirens,
drunken laughter, breaking glass...

I'd not have been surprised,
revisiting the bench
where we first met, to find
a label screwed to it:
The British poet Woods
ejaculated here.

From Gregory Woods, Records of an Incitement to Silence (Manchester: Carcanet Press, July 2021).

In a hugely ambitious study which crosses continents, languages, and almost a century, Gregory Woods identifies the ways in which homosexuality has helped shape Western culture...

Latest Reviews Gregory Woods' Homintern is not just a first rate work of literary and historical scholarship but a deeply moving narrative in its own right. David Leavitt