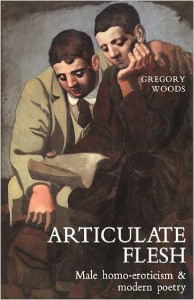 'One of the best works to come out of gay and lesbian studies' - Raymond Bentman, Journal of Modern Literature

'Some of the finest gay poetry criticism in English' - Paul Knobel, Encyclopedia of Male Homosexual Poetry

'The book is so immensely more perceptive than anything I already know on the subject. I can't imagine it being better' - Thom Gunn

Articulat­e Flesh is about modern poetry in English. It was written in the late 1970s, but did not find a publisher until the mid-1980s. The first half of the book, entitled ‘Themes’, has chapters on ‘The Male Body’, ‘Men of War’ and ‘Childless Fathers’. Then the second half, entitled ‘Variations’, has chapters on D.H. Lawrence, Hart Crane, W.H. Auden, Allen Ginsberg and Thom Gunn.

'About 30 years ago, I was speaking to Isherwood about Auden. We agreed that someone would one day write a great study of him showing the role of the communist spy he found so attractive was just as much that of sexual spy (often sexual spy pretending to be communist), and that this was the REAL key to Auden.

'Well, you have done not only that, but you’ve done an exemplary study of the whole subject … [I]t is such an obviously superior work that intelligent readers and scholars will find it one by one, and in a few years it will be taken for granted that this is an indispensible book. It is sturdy: alert, courageous, thorough-going, logical, sympathetic. It does its work so well that it contains certain essays on associated subjects - for example on the connection between obscurity of poetry by gay poets and their sexuality - that are not your central concern. The book is so immensely more perceptive than anything I already know on the subject. I can’t imagine it being better.'

Articulate Flesh is a well-argued, detailed and often witty study which should be read by anyone interested in either poetry or homosexuality.

This book is full of fascinating material intelligently analysed. It’s also written in an accessible style, and with a welcome lack of critical jargon ... Woods is writing for, and deserves, as large an audience as possible ... Articulate Flesh deserves a central place in the government's proposed national curriculum for schools.

An exciting and much needed addition to the critical scholarship on 20th-century poetry in English ... It is a thorough, intelligent, and restrained study that is free of the understandable defensiveness that tended to characterize a good deal of the gay literary scholarship until recently ... It makes an enormously significant contribution.

This clever and illuminating book ... displays a sharp critical intelligence rather than mere flag-waving.

Wonderfully steamy as well as scholarly ... He liberates his criticism from the ghetto, once so valuable, of Gay Studies ... This book, often perceptive and illuminating, does fill a vital gap in the libraries of literary interpretation and should definitely be part of the National Curriculum.

The result of vast research, this is a most accessible, stimulating and challenging book.

A cause for rejoicing among readers anxious to see gay literary studies come of age. Woods writes with great flair, is steeped in the specifics of his subject, and provides exciting theoretical dimensions for the overall nature of creativity and sexuality.

One of the best works to come out of gay and lesbian literary studies.

This book is a marvelous text of gay identity and about gay identity, in poetry as well as in fact.

The book contains some of the finest gay poetry criticism in English.