We Have the Melon 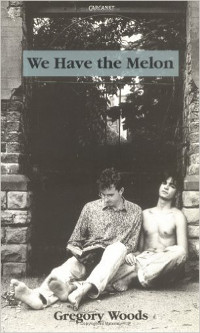 Gregory Woods, We Have the Melon (Carcanet Press, 1992)

The title is a quotation from Walt Whitman, and refers to one of the short poems in the book.

When the long poem ‘First of May’ won a prize in the 1989 Skoob poetry prize, the chair of the judges, Sir Stephen Spender, asked to see more of my poetry. I gave him a typescript of a longer version of this collection. He liked what he saw and encouraged me to send it to publishers. The book was taken up by Carcanet Press, with whom I have remained ever since.

The poems of Greg Woods fall into a Latinate tradition of poetry with a subject matter which might be described as pagan. They remind me often of the work of the Italian poet Sandro Penna ... The subject matter may seem raw but in economy and beauty of expression they have a kind of purity ... I have read Greg Woods’ poems with real excitement.

I’m not sure that I had ever written a fan letter before to a poet I had not met, but that’s what I did when I read two poems by Greg Woods, ‘Fall’ and ‘Silence’, in a magazine. I admired them especially for their technical virtuosity, in that it was technique completely used, never for the sake of cleverness but as a component of feeling. In the sixty-line ‘Fall’ the rimes riches have a strangely bruising effect, which accumulates to a sadness which is difficult to bear. ‘Silence’ consists of two short related poems, somewhere between epigram and song, like Elizabethan poetry but in terms completely of the 1990s. I cannot praise it too highly... At last, a good book of good poetry which takes as its subject a frank and unsentimental homosexuality. The triumph is in the numerous poems in tercets. Taken together, they constitute a handbook of desire; separately, each is an exquisite insight, rapid and rich. The predominant tone is of a kind of delighted astonishment that mere sensuality can be so meaningful ... What an enviable talent Gregory Woods has. I recommend this book to everybody.

Woods restores all the meanings of gay, mental and physical, has a fine sense of place and an engaging wit ... It’s the poems’ honesty that stays in the mind, anchoring their flamboyant sensuality in a real time and place.

Aware that erotically charged content may be best balanced by a coolly unemphatic form, Woods has come up with a luminous, suspended line ... The result is a liberating discipline: wonder distilled and concentrated by containment ... Woods has the knack of seeming constantly delighted by his experiences though not in the least deluded by them ... The overwhelming impression of We Have the Melon remains that of frankly sexual joyousness matched by serious literary intelligence, a rare combination and a reassuring one.

We Have the Melon is an excellent, evocative and deeply expressive collection of work … With earthy, outspoken but never crude depictions of sex and sensuality coupled with elegant lines evoking landscape and seascape, Woods creates from the barest words a lasting sense of place and emotion.

There is much to be admired and enjoyed in We Have the Melon ... this is a book full of humour, horniness of a very innocent kind, and great tenderness ... A promising start.